Hash vs Weed: Here’s How to Tell the Difference 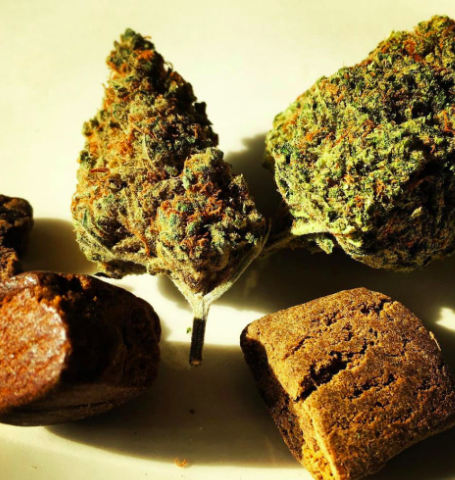 There are many people who are new to the cannabis market that might find it difficult or confusing to see the difference between weed and hash. As hash and weed can often produce some different effects, this article will explore more into how they are different and why the word should not be used interchangeably to describe cannabis. Here are some of the differences between Hash and Weed to help you determine which could be best for you.

Weed is otherwise known as dried cannabis. In many parts of the world, weed is made up of cannabis flowers that have been cured and dried over time. They are usually ready to vaporize, cook, or smoke in order to access the profile of what can be found in the concentrates. In some parts of the world, you may find some which is referred to as brick weed. This type of weed is not, typically well process that it contains all of the stems, leaves, buds, and seeds compressed together into a hard dark block for easy transportation.

There are countless strains of weed available. People have been breeding weed formally for years and the manipulation of these strains has been occurring regularly since the 1980s. Now we have strains of weed that produce various aromas, effects, and flavors. Sativa, for example, will produce a much more euphoric and uplifting experience whereas indica is a variety that produces a more mellow and relaxing effect. Keeping in mind that these effects come down to the chemical makeup of each plant and not necessarily the genetic linage of the plant’s makeup.

Hash gets its name from the longer term Hashish and It refers to the cannabis extract that’s made from separating the resin from the buds. There are several different ways that you can make hash and all of them involve separating the trichomes from the plant and pressing them into a cylinder, coin, or concentrated shape. The result of creating this item is that you have a stronger concentrate that has extremely unique effects and flavor. Some of the most traditional forms of hash were created first in Afghanistan, India, and Morocco. Afghan and Moroccan hash are most typically made from using a series of grinders and sieves to eventually make kief from the dried plant material. The kief is then pressed to produce a very dark and potent hash.

The traditional way to make hash in India involves rolling live cannabis buds continually between the hands. The heat and friction eventually caused trichomes to separate from the plant material and create a dark resin that could be rolled into balls and sold.

Other hash that’s manufactured today includes rosin hash, BHO, and more which are produced using solvents and heating methods. They are usually lab-created and involve much more work than a natural means of production that have been carried out for many years. The advantage of using solvents is that the process can be completed much faster.

How Do The Two Differ?

Weed Is prepared exclusively with female cannabis plants and keeping them well pollinated by males. At around 8 to 12 weeks of flowering, plants are cut and dried and then placed into jars before the curing process takes place. Hash is a much lengthier process to produce and it often involves first growing the cannabis plants and then working to separate the trichomes to eventually bind them together. Some of the simplest ways were mentioned before with Hand methods but there are also options to produce hash with hot presses, ice water, and agitation as well as butane methods.

The flavor profile for the two are quite different. Weed is often extremely fresh and herbal. It’s possible to get fruity flavors in different aromas as well as to have some complex and spicy notes. The flavors of hash are usually based on the weight it’s produced but it’s often a much more rich and smooth experience.

The potency in hash can be far higher than weed. There are some varieties of hash that can produce a potency of nearly 60% THC in a natural extraction method. BHO is one of the most sought after types of hash because it’s possible to reach a potency level up to 90% THC using the chemical methods. Most weed will be limited to a 30% THC potency at the very maximum in a top-quality strain.

Using hash is quite common with edibles, for smoking using a water pipe or vaporizing. Weed often has more versatile uses because they can be used for concentrates, edibles, vaporizers, or for smoking.

If you are an avid cannabis smoker and you would like to try hash, it can likely help you enjoy a greater potency than you may be used to. If you are still relatively new into cannabis, it could be wise for you to consider trying weed first before considering hash as an option.